When Becky Hadden went skating on the lake behind her house last January, she never imagined how that decision would change her life. At first, it started out like any of the countless times she had gone skating. “Then I fell on my right arm and the hand caught my fall,” recalls Becky,”I knew right away my arm was messed up. I was lying there in pain.” 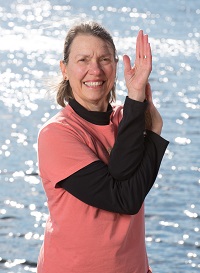 After her initial tests in the emergency department, Becky was referred to New England Hand Associates in Milford for a broken elbow. She met with Dr. Jeffrey F. Dietz; who scheduled her for surgery. New England Hand Associates specializes in hand, wrist, elbow and shoulder conditions, treating everyone from children to the elderly. “Our goal is for the community and other physicians in the area to think of us anytime you have an upper extremity problem,” notes Dr. Dietz. “We do trauma and fractures and see basically every disorder of the upper extremity. A lot of trauma patients need surgery right away. For problems that are more chronic, we try treatments like splinting, medication by mouth or cortisone injections. If the patient tries that and it doesn’t work, that’s when we consider more invasive treatment options.”

In Becky’s case, she broke the head of the radius and ruptured a ligament on the outside of the elbow, which would require surgery as soon as possible. “Whenever you fall, it’s natural to put your hand out like she did,” says Dr. Dietz. “Sometimes the joints in your wrist will fracture and you’ll end up with a wrist fracture. Others times the force can be transmitted to the elbow.”

Becky came to Milford Regional for day surgery and had general anesthesia. Because the elbow needed to be exposed, this was an open procedure rather than arthroscopic. “Dr. Dietz explained to us what he would do and how it would work,” relates Becky. “Dr. Dietz was energetic, enthused and clear
about everything. His description was so clean and neat that I forgot all about the tendons, ligaments and blood vessels. It sounded so easy and I realized afterwards how complicated it had been.”

During the surgery, Dr. Dietz took out a broken segment of bone, replaced it with a metal spacer and reconstructed the ligament of the elbow. “We replaced it with a piece of metal that looks exactly like the radial head,” he says. “Sometimes fractures can be pieced together with plates and screws and sometimes you have to replace it with a piece of metal. You don’t know for sure until you get in there whether you are going to be able to put it back together or whether you will have to replace.”

By late afternoon, Becky was released from the hospital in a post-operative splint. She praises the Milford Regional staff for how well they tended to her. “The nurse was efficient and kind,” she says. “The anesthesiologist was excellent – very clear, friendly, and professional.”

Ten days later, Becky received a custom-made brace during her follow-up appointment with Dr. Dietz. “I usually follow up with patients at about ten days, four weeks and twelve weeks,” says Dr. Dietz. “Most patients at three months are back doing 80 percent of what they were before. Recovering fully from any major surgery takes about a year.”

Becky felt well enough to visit her son in Wyoming less than a month after the procedure. She gradually built up her strength enough to do Tai Chi, yoga, and lift weights. Now, over a year after that fateful day on the ice, she feels like her arm is in great shape. “I couldn’t have been more pleased with Dr. Dietz and his expertise and clarity,” she concludes. “He explained everything in detail and answered every question. He did a great job with the surgery and the final result is fantastic.”